How to Prepare for Financial Instability 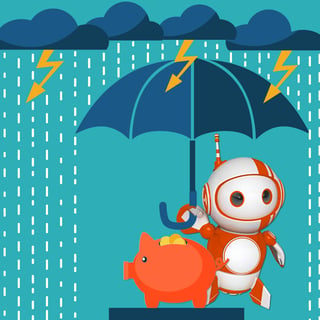 We would all love to know ahead of time about upcoming bills. It would be the easiest thing in the world to plan or save for things if we knew every single expense that was coming down the pike. While some of us wouldn’t save for a known future, most would. It’s the unknown that gets you. And it can be, frankly, terrifying to know how little control we ultimately have. For example, an unexpected job loss because the whole company gets sold. Something like that generally has almost nothing to do with your performance (unless you’re in the C-suite, and then you have a whole other set of stresses), but it can have a big impact on your day to day finances.

An effective strategy for dealing with this uncertainty is a two month emergency fund. Even if you don’t have a strict monthly budget (and you should, I'm just saying that if you don’t), you should still be able to look back through the last few months of bank statements and figure out how much you are regularly spending each month. If you spend $4000/month, you need to find a way to save $8000.

For almost everybody, this seems impossible. How in the world can you possibly save $8000 on a $4000/month income? A technique that works emphasises savings first. This means, a given percentage (usually 10%) of every single check you get goes to savings before anything else, not after. That’s it. At the end of the month, you’ll discover that you have figured out how to use what’s left to live on, in ways that you wouldn’t have had the discipline to do if you had let that 10% that should go to savings instead go into the bank account.  You will quite literally make it work.

Most banks will automate this service for you, automatically taking a percentage of your paycheck and putting It into a savings account. However, some have found it’s more useful to keep that savings in another bank altogether, so that it’s inconvenient to get to and you almost forget it is there. It’s purpose is to be an emergency fund that covers you in case of a dramatic change in circumstance. If big things happen, logging into another bank account to get at your savings isn’t that big a deal, but it might be just enough of a hassle to make you not dip into savings if you don’t really have to.

Of course, a two month buffer isn’t going to cover you for major life changes, such as a year of unemployment of another financial catastrophe, but those are exceedingly rare in life. What isn’t rare is situations where you will need your emergency fund, and two months is widely considered a safe amount. It gives you time to find another job, even if it’s temporary, or to sort out your unemployment insurance, which often doesn’t kick in immediately. It gives you a minute to breathe, and deal with the stress of the situation, before having to take immediate action.  And that time to breath can be invaluable.