What are you saving for?: Having a light at the end  of the tunnel can help you stay on track 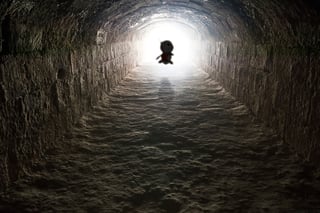 When we are children, it’s one of the most common questions we are asked: what do we want to be when we grow up?

But as we age, the bigger emphasis switches from far distance goals to the immediate future: what college do you want to go to, what is the next job that you want, how do you want to up the ladder?

Of course, a few times a year we see that word, “retirement” and are encouraged to think about it. But I find the way it’s all talked about very frustrating.  The conversation is about the very short term, and the very long term, and I find that human beings are very bad at thinking about the super long term.

What I think a lot of people miss is that pursuing their goals are fundamentally up to them.  Our school system is such a shute (which helps when you are a kid), practically pushing you up the ladder, that the process of forming goals, and constantly reminding yourself of goals, is something that slips through people’s fingers.

I focus, instead of on retirement, on thinking about the the physical, tangible sensations of what a successful mid-career might feel like.  Retirement (even at 37) feels too far off.  If I retire normally in 30 years (as opposed to my father, still working into his 70s on various consulting projects), the world could be so different from today as to be hard to imagine.  Looking back at 1986, todays job and financial landscape would be unimaginable to a 37 year old then.

But a focus on your mid-career, or career peak, avoids the “underwear gnome” dilemma.  If you don’t know the underwear gnomes, they are a group on the TV show Southpark with the following business plan:

While they are intended as a parody of start-up culture, they are also a pretty good parody of how a lot of people handle their career.  Because they don’t have a goal other than “profit,” and because that goal “profit” is set so far off in the future, they don’t think much about step 2, and worry entirely about step 1 (whatever job they have now).

Focus on where you’d like to be not just in 30 years, but also in 5-10.  You will very likely be somewhat wrong about some details, but if you have a clear goal for short term progress, you’ll be forced into a situation where you have to start planning for it if you want to make it happen.

Because of how the human brain works, if you get clear enough on a realistic step 3, you’ll start to fill in step 2.