Spending less is not the same as saving! 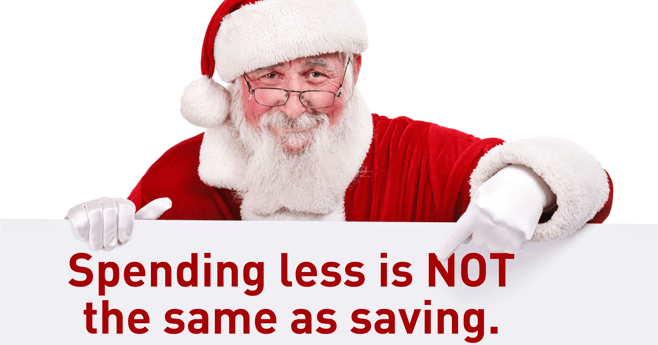 Don’t let advertising lie to you, spending less is not the same as saving!

The best black Friday purchase I have ever made was a double sided laser printer.  I had started a small business, and we were limping along on my own personal laser printer I had bought into the office, and we knew we desperately needed a new model, with wifi so clients could easily add it, with double sided printing, and with cheaper toner cartridges.  We knew this by August.

But we were a start-up, every single penny counted, and a good laser printer could easily be $500, so we waited for black friday, limping along with my overburdened 8 year old laser printer until we could get to the best sale day of the year. The best deal that day was $40 off a model that we used for the next 4 years.  I loved it so much that when I wanted a laser printer at home, I bought the same one.

The reason this was the best deal I ever received from a sale isn’t the $40. It’s that I absolutely, definitely, 100% am sure that I needed that item. The discount was a real discount on an item I know, for a fact, I would have purchased anyway.

While I have never bought anything in person on black friday, I do occasionally do a bit of online shopping that weekend, but after a few stupid purchases, I’ve created a little rule for myself. I try and make my list in september.  If I write it down in september as a good idea to shop for on black friday, and I find a good deal two months later when the sales are on, I grab it. If not, I don’t. The best part of this habit is looking at the list in late november and realizing how deeply I don’t need some of the items I put on the list in september.

The reason this is necessary is that saving money is something we all want to do, and advertisers work hard to equate “spending less money” with “saving.”  They are sort of right. Spending less money is the first step in saving. But the most powerful way to spend less money is to not buy things at all. Second to that is getting things you would buy anyway at the best price possible, which may or may not mean on sale. Ideally, advertisers would like you to skip considering whether you need something, and only think about whether or not that thing you want comes at a good price.

I knew I needed that printer, so I went looking for the best price I could on the printer, and used a well advertised sale to find it. But I try to avoid those “best deals of black friday” lists that show up everywhere that weekend, because unless I already knew I wanted something, the temptation of seeing something 35% off might convince me that I’m “saving” by buying something I never would’ve bought full price in the first place.

This year there is literally nothing on my list. I can’t think of anything I need; I have a working phone, and printer, and computer, and can do all the things I need to do to live my life happily without any more stuff getting added to the pile.  But as needs arise, a shopping list is a great tool for keep tracking of what you actually need, and then waiting for the right moment to strike."